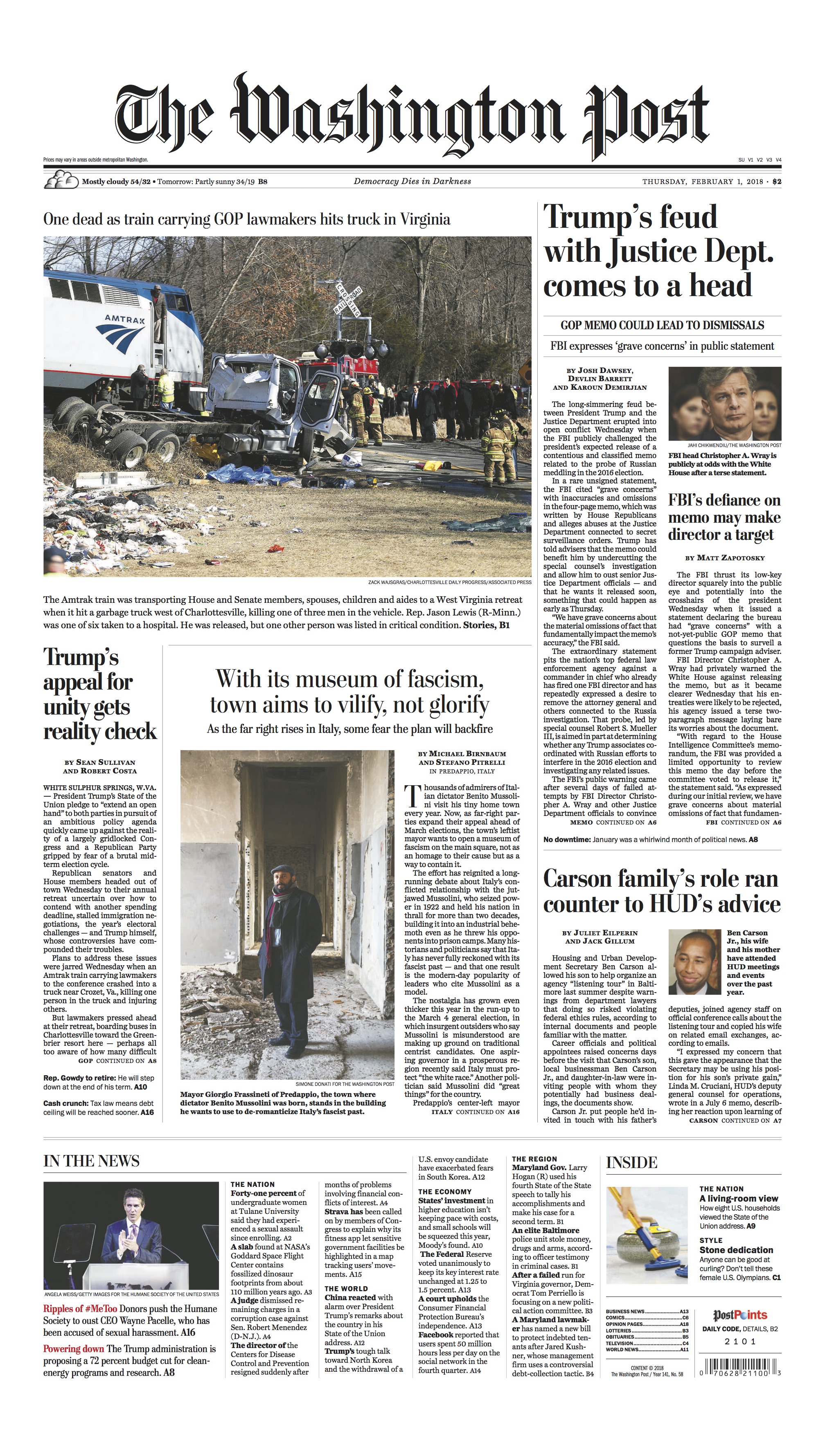 The Casa del Fascio, or House of Fascism, in Predappio, Italy. The town’s mayor, working with historians, plans to transform the building into a museum and center for the study of fascism. (Simone Donati/TerraProject for The Washington Post)

Thousands of admirers of Italian dictator Benito Mussolini visit his tiny home town every year. Now, as far-right parties expand their appeal ahead of March elections, the town’s leftist mayor wants to open a museum of fascism on the main square, not as an homage to their cause but as a way to contain it.

The effort has reignited a long-running debate about Italy’s conflicted relationship with the jut-jawed Mussolini, who seized power in 1922 and held his nation in thrall for more than two decades, building it into an industrial behemoth even as he threw his opponents into prison camps. Many historians and politicians say that Italy has never fully reckoned with its fascist past — and that one result is the modern-day popularity of leaders who cite Mussolini as a model.

The nostalgia has grown even thicker this year in the run-up to the March 4 general election, in which insurgent outsiders who say Mussolini is misunderstood are making up ground on traditional centrist candidates. One aspiring governor in a prosperous region recently said Italy must protect “the white race.” Another politician said Mussolini did “great things” for the country.

Predappio’s center-left mayor wants to overhaul the town’s crumbling 1937 House of Fascism, an imposing marble-and-brick edifice with a balcony once used for delivering speeches to cheering crowds, for the proposed Museum of Fascism.

Backers of the plan envision a spiraling display modeled on Dante’s circles of hell, with Mussolini’s pugnacious presence at its center. Visitors would gaze out at neighboring hills from the curving, airy ballroom where local fascists once held their galas. They would eat in the same spot where Blackshirts once sipped espressos.

If the project’s backers find the additional $6.2 million they need for the museum, it would be Italy’s first devoted exclusively to the fascist era, 73 years after Mussolini was executed and strung up by the feet in a public square in Milan. Shops in Predappio cater to his fans, selling marble busts of the dictator, hats stitched with fascist icons and collections of his speeches.

“Predappio is the right place to do this, because it’s a fascist symbol,” said Giorgio Frassineti, the mayor of the leafy town of 6,000 in Italy’s rolling northeast. “I want to use culture as a weapon of mass destruction for ignorance.”

Advocates already have $2.5 million in pledges, and the town owns the empty property.

Unlike neighboring Germany, where Adolf Hitler remains a third rail even for far-right parties, Italy has long harbored ambivalent feelings about its fascist leader.

“Mussolini built so many things,” Matteo Salvini, the leader of the far-right Northern League party, said on Italian radio Friday. “But I prefer democracy to dictatorship, dictatorships of any kind.”

A sense that Mussolini is being rehabilitated unsettles some of Italy’s mainstream leaders.

“It is surprising to hear, even today, from some quarters, that fascism had some merits but made two serious mistakes: the racial laws and the entry into the war,” Italian President Sergio Mattarella said in a speech last week marking the 80th anniversary of the signing of Italy’s notorious anti-Semitic racial laws. “Racism and war were not deviations or episodes from its way of thinking, but the direct and inevitable consequence.”

Frassineti said he fears that there is a trend on the continent toward a fascist resurgence.

“In Europe, there is a wind blowing in that direction,” he said in Predappio’s town hall, where he said his high-ceilinged office once served as Mussolini’s childhood bedroom. He blamed the fascist stirrings on a poor understanding of the past. “This country has given up on a whole generation. Because schools and politicians haven’t done their job.”

In Predappio, traces of the fascist leader are everywhere. His birthplace, a squat stone structure where the guest book is full of far-right slogans, is fronted by a sweeping Fascist-era plaza. Just outside town, the leader’s crypt looms over the cemetery.

On a recent sunny weekday afternoon, a steady stream of visitors walked up to the high-arched mausoleum, where a red-white-and-green Italian flag was tied to a door handle. Some threw the stiff-armed fascist salute. Others praised Mussolini’s leadership.

“This is our Bethlehem. This is a way to pay thanks for what he did for the world,” said Antonino Monti, 64, who ambled up to the crypt, trailed by his wife, daughter and their Chihuahua, then saluted smartly.

“He was the best leader of the 20th century,” said Monti, who said he visits Predappio several times a year from his home in Sicily, where he works on the Sigonella air base.

The growing traffic to Predappio — city leaders say it draws more than 50,000 people a year — has upset groups that represent victims of fascism.

“This city is becoming a temple to Mussolini,” said Noemi Di Segni, the head of the Union of Italian Jewish Communities, who backs the museum project.

The museum’s planners, like Di Segni, argue that it is past time for an analytical look at the history.

Italians live “without the possibility of understanding how Italian society lived during the fascist era,” said Marcello Flores, a history professor at the University of Siena who heads the academic committee designing the museum. Remedying that, he said, is the museum’s principal aim.

Some civic leaders say Italy has not learned lessons from its past.

“We weren’t able to spread out to young people in the schools how bad a dictatorship is compared to a democracy,” said Emanuele Fiano, a center-left lawmaker in the Italian Parliament who recently proposed a bill to outlaw the fascist salute and distribution of National Fascist Party and Nazi imagery. Current laws ban such materials only if they are being used to re-create the historical Fascist Party, which gives wide leeway to Mussolini’s admirers.

But critics of the museum say that rather than diminish the town’s appeal as a fascist destination, it could entrench it by adding yet another attraction on the far-right Mussolini tour. Predappio is far from Italy’s established tourist centers, requiring a slow train and a bus from Bologna, the nearest big city. Few people seek it out, other than those with a penchant for Mussolini.

“I’m afraid Predappio might become a place for spreading fascism, not rejecting it,” said Anna Foa, a historian of Italian Judaism who has opposed the project.

“A museum of fascism would de facto become a place of pilgrimage for fascists” if it were in Predappio, said Carla Nespolo, the group’s president.

Many analysts say that Mussolini nostalgia has helped drive the success of Italy’s modern-day far right. The two biggest far-right parties, the Northern League and Brothers of Italy, together capture about 18 percent in opinion polling and could win power in March in coalition with the larger Forward Italy party of Silvio Berlusconi, who has praised aspects of Mussolini’s rule.

A smaller far-right group, ­CasaPound Italy, has been more explicit in its embrace of Mussolini. And although its national support remains low, it is growing and has won some local offices.

“We have to recognize that something is still working, something created by fascism,” said Alberto Palladino, a member of the group’s steering committee.

In Predappio, anti-fascist activists say they remain shocked that such sentiment is still so visible. Stores selling Mussolini memorabilia line the main street in proud defiance of laws against “apologizing for fascism.”

“They’re like sex shops for fascism,” said Stefano Ignone, a member of a local foundation that has battled the museum plan. “But at least in a sex shop, they cover the windows. Here, it’s all in the open.”